The original Zhan Zhuang (Standing Meditation) were health practices used by Daoists. Zhan Zhuang has a strong connection with Traditional Chinese Medicine used as a practice for removing blockages in Qi flow. Zhan Zhuang practice is thought to draw Qi into and strengthen the body’s central nervous system and also to draw Qi into the muscular-skeletal and energy gates throughout the body. It is also believed that Zhan Zhuang will lead to a beneficial calming effect and an opening of the Qi through the body’s meridians. Beginning practitioners of Zhan Zhuang can experience severe muscle fatigue and subsequent trembling, aching, numbness, dizziness, and even nausea at first and they can progress into deep relaxation and develop powerful strength from this training. These various symptoms are taught by some to be energy blockages throughout the body that clear through continued practice. 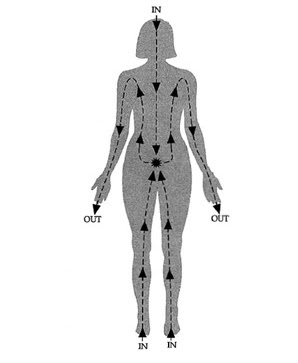