Of the eight extraordinary meridians in the body, two main channels; the ‘Ren Mai’ channel and ‘Du Mai’ channel are considered highly significant in Taoist meditation.

The ‘Du Mai channel’ or ‘Governing Vessel’ is the Yang channel running downward, however in the Small Heaven practice, it is run upward from the perineum to the crown and down to the just above the upper lip.

The ‘Ren Mai channel’ or Conception Vessel is the Yin channel that runs upward , however in the Small Heaven practice, it is run downward from just below the lower lip from to the perineum. 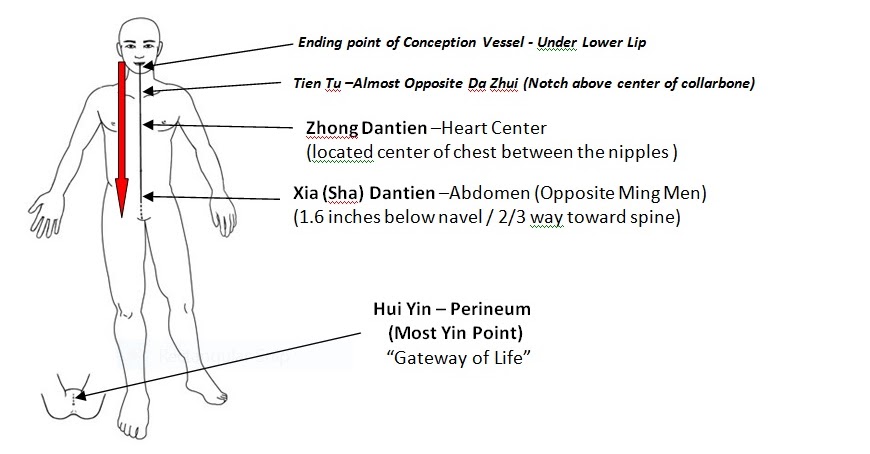 Directing Your Focus On The Key Energy Gates

Afterward you may begin practice circulating the Qi up the Du Mai channel in a single breath beginning from the Hui Yin point at the perineum and inhaling from Hui Yin and drawing the Qi up to the Crown Point called Bai Hui. Then exhale from Bai Hui down to Hui Yin and repeat.

Finally, draw you attention back to the Xia Dan Tien, keeping your breath and concentration in Xia Dantien for a few minutes at least. Complete the practice with the closing form for returning the Qi to the external body and grounding yourself (Study “Closing Form” first).

Note: It is highly recommended that you become proficient with Small Circle first before you begin Small Heaven. Small circle is similar except the circle ends at Ming Men (the lower back) and crosses over at the diaphragm.

The history of the Small Heaven Meditation dates back to prehistoric times in China, and the underlying principles can be found in the I Ching. Lao Tzu and Chuang Tzu have also alluded to the technique of this meditation, encouraging circulation of energy through theses “psychic” meridians in their writings.

A stone carving in the White Cloud Temple in Beijing contains a pictorial representation of some of the symbols which describe the processes involved in the microcosmic orbit meditation technique. These particular techniques are derived from the Taoist Patriarch Lu Tung Pin who was born in 798 AD. Lu Tung Pin was one of the Eight Immortals from the Taoist tradition.

The Governing Vessel and Conception Vessel are the main rivers of the body’s Yin and Yang energies. They are polar aspects of the body, perfectly complementary, like midnight and midday. These vessels are formed during the first cellar division forming left and right sides. 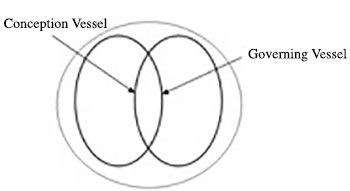 At the time of conception during the first cell division, the primary Yin and Yang meridians of the body or the Governing Vessel and Conception Vessel are formed. The Yin meridian is infused by the Mother and the Yang meridian is infused by the Father. These are the two polar energies; feminine & masculine energy, internal & external energy, etc., that work in harmony with each other and they come together to form the human.