Qigong has been widely known to exist from 4,000 to 5,000 years ago, yet evidence suggests Qigong has much older origins.

Archaeological objects suggest that the earliest evidence of Qigong practice is from the discovery of the Neolithic vessel found in the early 1980’s in Northwest China. The pottery is identified as a Shamanic vessel. The image on it is nearly 7000 years old. Archaeologists suggest it represents a priest-shaman individual practicing Qigong.

The image of the body posture on the pottery is identical to the posture of the essential (Dantien) Qigong practice. Qigong historians contend that the priest-shamans were the earliest Qigong masters. 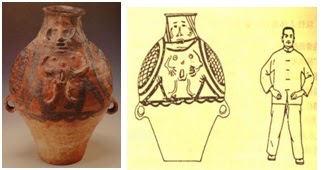 According to the traditional Chinese medical community, the origin of Qigong is commonly attributed to the legendary Yellow Emperor. The Yellow Emperor is credited with having invented Chinese medicine and various religious practices, including worship of the sun, moon, and five planets.

Various records indicate that Qigong was likely practiced over 4300 years ago. During this time period, a legendary figure named Peng Zu was known as a Qigong practitioner. Peng Zu supposedly lived approximately 800 years spanning numerous Chinese dynasties including the reign of emperor Yao. Peng Zu is viewed by many as one of the pioneers of Qigong.

Also during the time of the Yao Dynasty, some documentation indicates that in that time, people used to dance to strengthen their body and also to regulate breathing, energy (Qi), and blood circulation in order to be healthy.

Records indicate that bronze objects found from the Zhou Dynasty (11th century – 770 B.C.) were inscribed with the characters “Qigong’ on them. Other records indicate that during the spring and fall and also during the “Period of the Warring States” (475 B.C. – 221 B.C.), a Dao Yin practice, the old version of Qigong, was documented as being practiced.

Confucius, (551–479 B.C.) and Mencius, 385–302 B.C.) are considered the founders of the Qigong literature and traditions in ancient China. In their writings, they alluded to Qi training as methods of moral training.

In the Taoist tradition, the writings of Lao Tzu (400 B.C.) and Chuang Tzu (300 B.C.) also describe meditative cultivation and physical exercises as means to extend one’s lifespan, and to access higher realms of existence.

A famous manuscript of Dao Yin drawings called the Mawangdui Silk Texts (168 B.C.) from the tomb of the Han Dynasty was discovered depicting what is now commonly known as Qigong practices. 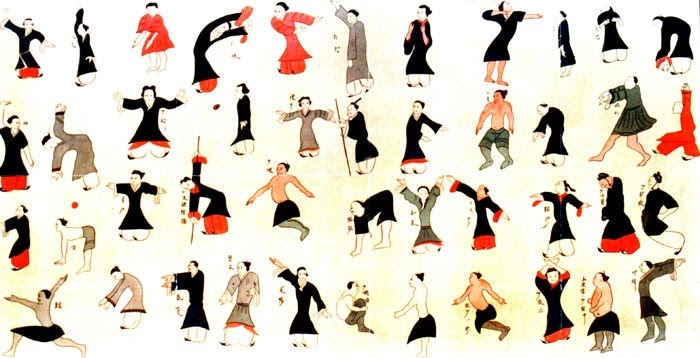 Other descriptions for Qigong have been used throughout history including:

These different names for Qigong suggest that such practices are practically inherent in the Chinese culture and that they have existed for millenniums only described under different names.

An underlying concept in Qigong & Tai Chi practices are man’s relationship with the natural world, which is related to heaven and earth and referencing the sun and the moon as possibly symbolizing the polarities of Yin and Yang. These concepts are based on the natural world being a teacher of balance and health. Through the study of the natural world, Hua Tuo, a physician and healer created exercises based on watching the movements of five animals; the tiger, the bear, the deer, the monkeys, and the birds. These exercises modified into numerous variations over 2000 years.

Tai Chi later evolved from Qigong based on the concepts of Hua Tuo’s animal exercises including the fundamental Chinese concepts of the Yin and Yang based in the Tai Chi movements. Some suggest Tai Chi was created by the Chen family in the 1600’s, however its roots are believed to be older. Other evidence suggest that Master Zhang, San-Feng is the actual founder of Tai Chi. Master Zhang, San-Feng was born in 1242 A.D. and was reported to be a healer an a sage and the founder of the internal school of Tai Chi in Wudang Shan. According to various accounts he lived for over 200 years until the mid-Ming dynasty. Master Zhang, San-Feng was documented to have observed a bird attacking a snake and he was greatly inspired by the snake’s defensive tactics. Based on this observation, it purported that this inspired Master Zhang, San-Feng to develop 72 Tai Chi movements. These movements were developed for health, spiritual and mental balance, and also for martial arts application.

Zhang, San-Feng watched the interplay between a snake and a crane to develop the Tai Chi movements. When the crane would strike with its beak stretched out, the snake would withdraw and coil. When the snake would then spring out toward the crane, the crane would withdraw back opening its wings. It was a back and forth dance from which two classic Tai Chi movements evolved; “Snake Creeps Down” and “White Crane Flashes Its Wings”.

Based on this concept of the snake and the crane, the remaining Tai Chi movements created by Zhang, San-Feng reflected either a Yin or Yang motion of movement.